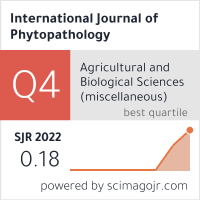 Identification of Host Resistance against Bacterial Canker Disease on Apricot, Plum and Peach Grown in Punjab and KPK

Bacterial canker disease caused by the pathogen Pseudomonas syringae pv. syrinagae (Pss) has been spread widely in Pakistan,  in Punjab and KPK provinces specially in strone fruits like apricot, Peach and Plum. During the 2014–2015 growing period, diseased samples were obtained from peach, plum and  apricot trees showing bacterial canker  symptoms  in Punjab and KPK provinces and 48 Pseudomonas syringae  isolates were obtained. The main aim of this research study was to find out host resistance in the cultivars of Apricot, Peach and Plum against bacterial canker caused by Pss in Peach, Plum and Apricot cultivars grown in Punjab and KPK province of Pakistan. In a pathogenicity test, three Pss isolates (PS3, PS9 and PS17) were found to be highly virulent in peach, plum and apricot  and were tested for cultivar resistance to Pss. Leaves and shoots of five varieties of Peach Early grand, Florida king, 4 ½, 5 ½, 6 ½, Four varieties of Plum Red beauty, Fazal-e- manani, Stanley, Producer and Two varieties of Apricot Chinese apricot and golden amber were foliar sprayed with a mixed culture of Pss having concentration of 10-8 cfu ml−1 . Sprayed cultivars were covered with plastic bags for 3 days for retaining moisture and kept in glass house and were keenly observed for appearance of  symptoms. 5 ½ of peach, Fazal-e-manani of plum and Chinese apricot of apricot were found resistant while 6 ½ of peach, Stanley of plum were found susceptible and Golden amber of apricot was found moderately susceptible to Pss. This is the first report of host resistance response of apricot, peach and plum cultivars grown in Pakistan to Pss.